UM Compost Program By the Numbers

The University of Mississippi Compost Program began as a Green Fund project, which was proposed by a student in 2012. In 2013, the UM Compost Pilot Program launched as a part of The Office of Sustainability in collaboration with the School of Pharmacy’s Medicinal Plant Garden and Ole Miss Dining Services. Below is a visual overview of the UM Compost Program, from its initiation to the current year, through a series of graphs that depict the total food waste that was composted in a given year and month over the course of the program.

The graph on the right gives an idea about the composting program from 2013-14 to 2017-18. 2013 was our first year, also called the pilot program, where we collected compost

materials from the Residential College South. In the year 2014/15, we added Rebel Market to the compost program and have continued to add dining locations since then. The expanded program composts food waste from Residential College South, Rebel Market, Einstein’s Bagels in Anderson Hall and Law School, Lenoir Dining, and the Food Bank. Ole Miss Dining has implemented a pre-consumer food waste reduction program which was one of the factors for the decreased amount of food waste composted over the years.

The graphs included below break down the year into months and provide a detailed view of the composting program over the course of academic years from 2013-14 to 2017-18. The composting program operates on a semester schedule, from August to December in the fall and February to May in the spring. The sudden drop in graphs represent these breaks between the semesters.

The UM Compost Program launched in 2013-2014 with a pilot program in the Marketplace at the Residential Colleges. However, the program was intended to expand and so, it started including more dining locations in the subsequent years.

The Grill at 1810 and the Food Bank were the next additions to the program. The Food Bank makes every effort to donate food before it expires to other local pantries, but still receives many donations of expired food, which are then composted. The months from September to October and from February to March were one of the highest contributors of usable food waste in the year 2015-16.

In 2016-17, the program added Lenior Dining Hall to the pickup locations. Rebel Market was one of the highest contributors in this year.

During 2017-18, the program began picking up food waste from Einstein Bros. Bagels in Anderson Hall and the School of Law. These locations supply the program with coffee grounds, among other food waste. 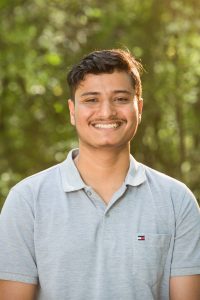 Anish is a junior at the university majoring in Mechanical Engineering. He joined the Office of Sustainability in the Spring of 2019 with the motive to learn more about sustainability and apply his learning to his engineering career to make the world a more sustainable place. He helped analyze the data from the past composting logs to create visualizations of the composting program started by the office in 2013-14. The program has since then, grown to accommodate more dining locations throughout the university. The visualizations help understand the trend of the compost program in particular locations of the university which can be useful to draft and target location-specific action plans. Anish is also working on analyzing data from other programs of the office like the Greenhouse Inventory Program. During his free time, Anish likes listening to music, playing soccer or basketball, swimming or traveling near-by places with his friends.